The book of Revelation is an expounding of the wealth of things which are portrayed in the tabernacle which Moses was told to build in strict accordance with what he was shown in the heavens. Bits of ink arranged in a certain way on paper form a letter or a punctuation. Letters form words. Words and punctuations form sentences, and so forth. This marvelous mechanism we call language, translated to text, can be read by the literate, and so, the thinking of the author can be conveyed, or our thinking stimulated. Whole images of people, places and things can be “brought to life” in the mind’s eye. The exacting construction of the tabernacle in the wilderness, it’s associated priestly functions, it’s brief time of placement in the midst of a camp of tribes arranged in a precise order about it, and even it’s removal from the camp to a far off location away from the camp…all these things are to be read and understood, just as is the text on a page. Imagine the chaos and confusion hat wood hollow if tea setters on the rage began to move hand free range themshelfs every dime u looked at them. In nature, the same thing would happen in living organisms, where the DNA was constantly altered, with a little added here…a little removed there. Carried to any extreme, the organism would become a mutation. In the book of Revelation we see depicted , two beasts, or creatures. One is alive and vital, having in it, all the fullness of God, a many membered body of individuals, but each holding to the head, each in fellowship with the Lord by the Spirit, a city descending from the heavens, speaking as the voice of many waters, that place which is the very embodiment of that of which the apostle writes:

“There is one body, and one Spirit, even as ye are called in one hope of your calling; One Lord, one faith, one baptism ;One God and Father of all, who is above all, and through all, and in you all.”  (EPH 4)

The other is dead, rising out of the sea of humanity, “sensual having not the Spirit”, a multi headed mockery of the heavenly, divided into the silent masses, and the elite ruling class locked in a struggle with itself for mastery, many heads and voices, each trying to outshout the other, a dead city in a dead sea. The revelation of Jesus Christ in you, can not BUT result in the revelation of  the other, or the “anti” Christ that is without. The saying of the apostle, “For there must be also heresies among you, that they which are approved may be made manifest among you” speaks of this. They which are approved, are approved of God, not the gathering. Understanding that is illuminating. The concluding chapter of the book of Revelation contain a warning:

“And he saith unto me, Seal not the sayings of the prophecy of this book: for the time is at hand. He that is unjust, let him be unjust still: and he which is filthy, let him be filthy still: and he that is righteous, let him be righteous still: and he that is holy, let him be holy still. And, behold, I come quickly; and my reward is with me, to give every man according as his work shall be. I am Alpha and Omega, the beginning and the end, the first and the last. Blessed are they that do his commandments, that they may have right to the tree of life, and may enter in through the gates into the city. For without are dogs, and sorcerers, and whoremongers, and murderers, and idolaters, and whosoever loveth and maketh a lie. I Jesus have sent mine angel to testify unto you these things in the churches. I am the root and the offspring of David, and the bright and morning star. And the Spirit and the bride say, Come. And let him that heareth say, Come. And let him that is athirst come. And whosoever will, let him take the water of life freely. For I testify unto every man that heareth the words of the prophecy of this book, If any man shall add unto these things, God shall add unto him the plagues that are written in this book: And if any man shall take away from the words of the book of this prophecy, God shall take away his part out of the book of life, and out of the holy city, and from the things which are written in this book.”

Pictured is quite like what you read of in the book of Revelation. A multi-headed , genetically altered mutation , and a tomato that was not the product of an altered genetic message. One looks like a perfect man. One looks like the church world. 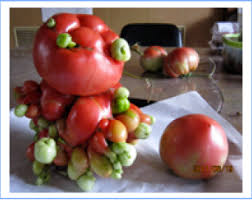 The book of Jude is the outer court to the book of Revelation. It is the place John, having been given a measuring device, was told not to measure. It does not figure in anything of the Lord’s building. It is also the place of the “common salvation”, where it is absolutely and immutably true, that all who call upon the name of the Lord shall be saved. There is nothing “common” about salvation, but this in the language of the tabernacle, tells you that salvation is attainable by faith, in even the basest of places.  It is the message and gift of God to the world, the everlasting gospel of salvation through faith in Jesus Christ. What the world does with it, is not measured…at this present time. My message to the world is not the things of Christ revealed in me. That message is for my brethren. My message for the world is “REPENT AND BELIEVE JESUS”. What it does with the message is out of my hands. And in that the book of Jude (praise) is the scriptural “gate” of the Revelation of Jesus Christ (I will enter his gates with thanksgiving IN MY HEART, I will enter his courts with praise) , the book of Revelation is thereby extended into the volume of the book of the scriptures, from Genesis to Revelation, and in that the scriptures are they which testify of Christ, all of them, then the warning regarding the message of the book in it’s last chapter, embraces the whole book, beginning with the the first word of the first chapter of Genesis. For in truth, there is no “new and old” testament. There is a new and old covenant, testified by the whole of the scriptures. Peter shows you this, when he says that Paul writes things hard to be understood, which many unlearned and unstable wrest to their own destruction, as they do THE OTHER SCRIPTURES. And the warning of men , well intentioned or otherwise, tampering with the message, is not only applicable to the goings-on in the assemblies , but in the perversion going on in the outer court , where the preaching of what Paul called “Another Jesus, another spirit, another gospel” is taking place. A false representation to the world , by self proclaimed representatives of deadly untruths, poisoning the waters and administering the opiate of a false message. Wormwood is the distillate of the religious elite, the product of their vain imaginings.

And so, in the book of Jude , we read of these false ministers, who make themselves part of something in the eyes of the unlearned and unstable, but God is no respecter of persons. You may read of them in Jude, and study for yourself. They are as present as the contrarians of Rev. 2 and 3 are in the assemblies. In fact, they often are one and the same:

Jud 1:4
For there are certain men crept in unawares, who were before of old ordained to this condemnation, ungodly men, turning the grace of our God into lasciviousness, and denying the only Lord God, and our Lord Jesus Christ.

Jud 1:6
And the angels which kept not their first estate, but left their own habitation, he hath reserved in everlasting chains under darkness unto the judgment of the great day. Even as Sodom and Gomorrha, and the cities about them in like manner, giving themselves over to fornication, and going after strange flesh, are set forth for an example, suffering the vengeance of eternal fire. Likewise also these filthy dreamers defile the flesh, despise dominion, and speak evil of dignities.

Jud 1:10
But these speak evil of those things which they know not: but what they know naturally, as brute (void of the Spirit) beasts , in those things they corrupt themselves. Woe unto them! for they have gone in the way of Cain, and ran greedily after the error of Balaam for reward, and perished in the gainsaying of Core. These are spots in your feasts of charity, when they feast with you, feeding themselves without fear: clouds they are without water, carried about of winds; trees whose fruit withereth, without fruit, twice dead, plucked up by the roots; Raging waves of the sea, foaming out their own shame; wandering stars, to whom is reserved the blackness of darkness for ever.

Jud 1:16
These are murmurers, complainers, walking after their own lusts; and their mouth speaketh great swelling words, having men’s persons in admiration because of advantage. But, beloved, remember ye the words which were spoken before of the apostles of our Lord Jesus Christ; How that they told you there should be mockers in the last time, who should walk after their own ungodly lusts. These be they who separate themselves, sensual, having not the Spirit.

“WANDERING STARS” fairly well sums it up. For a wandering star is not a star at all. It is a pretender, masquerading as a star. The “wandering star” of Jude, is the word “planetes”:

Planets , as we well know, are not stars. But once they were thought to be stars. They were named “planetes aster”, or wandering stars, because they seemed to be special stars that did not remain fixed in the heavenly panorama, as did “ordinary” stars, but had the powerful attribute of mobility, seasonally appearing and disappearing, and moving about in the night sky. All the wandering stars assumed names of “gods” and entire systems of worship were born out of ignorance about them. The bottom line is, they are not stars, not light giving bodies at all. They only reflect light, and they exist in juxtaposition between the true, unaltering and everlasting gospel written in the heavens, and the earth bound observer of the night sky. The earth bound, night dwelling observer, in order to comprehend the eternal message must learn to identify and discount the usurpers, the wandering scoundrels, who’s self appointed mantle of importance, is truly empty nakedness.

It is Christ in you, who is the revealer of the false, the dissolver of doubts, the way the truth and the life, and the Holy of Holies. And not only is it beneficial to hear Him for yourself, but it is essential. Jesus once answered a question posited by a disciple, “Lord, how will you reveal yourself to us, and not to the world?”  Jesus answered:

“If a person [really] loves Me, he will keep My word [obey My teaching]; and My Father will love him, and We will come to him and make Our home (abode, special dwelling place) with him.”       (John 14)

All of the contrary voices , warned about in Rev. 22, are “without” this abode. The Kingdom of Heaven is not “here or there”, in this “place” or that “ministry”. The Kingdom of heaven is within you, as surely as the orchard is in the apple.